The Need for Truck Scales

It's no secret that most of America's goods are transported by truck. Because of this, states have enacted various laws and taxes to regulate the industry. Each state has its own laws on how much a truck can weigh when transporting goods. A common standard for the weight allowed is 34,000 pounds or 15,400 kilograms. The amount of weight carried per axle is called axle weight. The gross weight is the total of all the axles of the truck. Most states receive taxes from the truck weigh stations, which goes to improving the roadways. Trucks that are overweight are subject to heavy fines, which is why there are many high quality truck scales available for companies and contractors.

Truck scales are made out of concrete and steel. They are built to handle a large amount of weight each day all year long. The scales can handle up to 80,000 pounds or 36,000 kilograms per load. The weight is calculated by sensors that receive signals from a junction box. Strain gauges, which are wires are embedded in the concrete and have an electrical current running through them. These wires will compress when pressure from the weight of the truck is sensed. The weight is then displayed on a monitor in a booth where the attendant records the weight. It is vital that these systems are reliable and functioning, because if they aren't it will directly affect their pocketbooks.

Another way that is used is called one-axle. In this instance the truck driver needs to place each axle on the truck scales one axel at a time. Once all the axles are weighed a total is given. This takes a lot of time out of the driver's schedule. One stop weighing is where the driver can place the truck on one large scale and the controller will give a gross weight. The one popular method of weighting trucks is when the truck is in motion. The truck doesn't have to stop at all. The sensors on the truck scales will pick up the weight and record it all while the truck is in motion.

Another reason that a company uses truck scales is because running an over loaded truck all the time would cause more wear on the truck. The engine would have to work harder which means you need to change your oil more often to accommodate for the extra stress. Tires would also wear out at a faster pace. Running an over weighted truck is a safety hazard as well as being illegal.

Fines for running an over weighted truck in some states have become much higher. Some fines ran 10 cents a pound for every pound you were over the weight limit, up to a fine of $500 per load. Those same states now are charging fines of 12 cents per pound with no limit to the amount of the fine. States are getting tired of truckers running loads that are overweight and ruining their roads and endangering other drivers. The heavy weight of the trucks does enough damage to the roadways at the normal weight. When to many over weighted trucks continually use their roads it causes repair needs to be done often. The taxes they collect go towards keeping the roads safe for all drivers. So we all have truck scales to thank for not only getting us our goods, but keeping us safe as well!

Troy writes about anything and everything interesting. Have any idea for an article? Pass it along!

North Bay Truck Center and A&T Road Service offers heavy duty towing services. We have the most flexible and useful rigs to tow the biggest trucks on the road, along with big buses, and large RV units. See some detail below about our latest truck additions.

Our normal service area covers the best part of the bay area and Sacramento region; however, we now have capability to tow across the country if needed. Our A&T Road Service has expanded so much that we had to add towing to make it even more effective and timely. 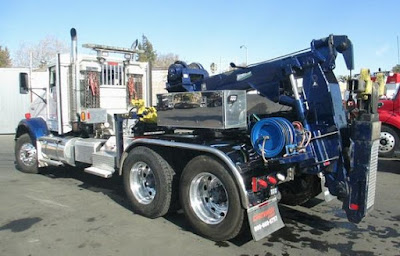 Included in our towing fleet is the HD Kenworth tow truck shown above, its a number 30 with the Holmes D.T.U. (Detachable Towing Unit). This proven design and technology comes from the most trusted name in the towing industry. The front legs allow the unit to be easily removed in a matter of minutes so the truck can be multi-functional for both towing or pulling trailers. It has a lifting capacity of 16,000 lbs when extended and will extend up to 113 inches past the tailboard.

This new commercial truck or potential CDL truck driver tips video discusses how to scale your load if you are on a gross weight scale where each axle is not broken out for you.

Most truck driver shippers or distribution centers who are larger will have scales, but most only will have a gross weight scale, not an individual axle scale.

I show you how to figure your scale load out per axle when you only have a gross weight scale for your 18 wheeler big rig.

Thanks for watching. See more tips at http://RedVikingTrucker.com﻿
Posted by Jim Barnes at 8:14 AM No comments: 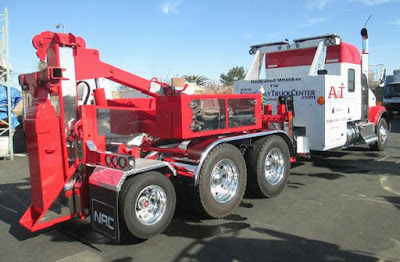 The newest addition to our tow fleet is truck number 32. This is a 2014 Kenworth with a Cummins 500 hp engine and 18-speed transmission. The working end of this mighty tow vehicle is the NRC Quickswap unit with tag axle. This unique design will allow us to tow almost anything on the road. We can now lift up to 20,000 lb steering axle trucks, and also buses and large RV units. The long wheelbase and the tag axle combine to allow us to tow a wide variety of units.

In addition, this truck is well suited for short and long haul jobs. With the sleeper unit, we can tow across the country if needed, or for local jobs the sleeper will accommodate extra passengers. The unit is equipped with state of the art LED lighting to light up the are needed in the night, as well as tool, equipment and parts storage to take care of small repairs, DEF issues and much more.
Posted by Jim Barnes at 9:48 AM No comments:

When Your Truck Is Down, You Can Depend On A&T Road Service and Towing

Welcome To Our New Blog For A&T Road Service!

Thanks for stopping by. We are beginning our new blog to tell more about our A&T Road Service's services, and to give out some great information on subjects that surround the onsite repairing of trucks and helping get trucks back on the road in minimal time.
Posted by Jim Barnes at 6:23 PM No comments: