Getting good sleep: It still ain’t easy, especially in trucking

But sleepiness poses a lot of risks,
especially to transportation workers. 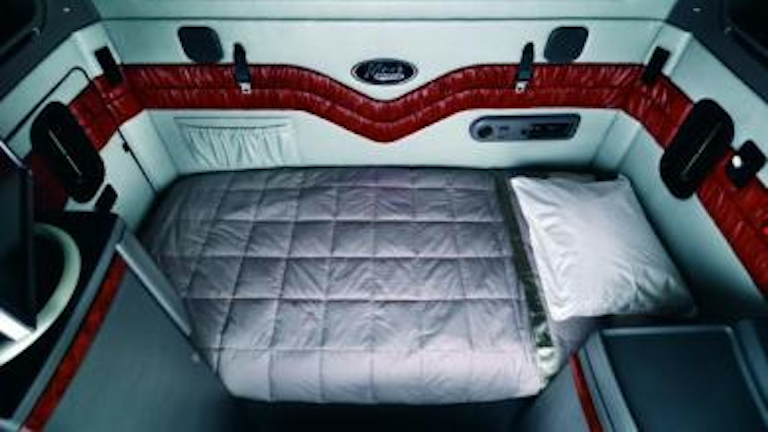 I’ve slept in a sleeper berth a time or two and it’s something that takes getting used to for most folks; even for long-haul irregular route TL drivers who live in their trucks three weeks or more out of a month.

There are external noises to deal with, the often-constant rattle and hum from diesel-fired auxiliary power units (APUs) or idling engines, and the effort to get physically comfortable on a mattress that’s mayhap not as comfy as the one back home.

Thus getting good, restorative sleep for truck drivers can sometimes be a struggle, and that’s before we inject medical issues such as sleep apnea in to the mix. But truckers should take heart from one aspect of their “sleep struggles,” if you can call them that – they aren’t unique to the freight-hauling business, not be a longshot.

According to a recent global survey conducted by Royal Philips called Better Sleep, Better Health. A Global Look at Why We're Still Falling Short on Sleep, which looked at what keeps people from getting their “optimal” night's rest.

The survey – conducted online in February by Harris Poll on behalf of Philips – reviewed the “sleep habits” of over 15,000 adults across 13 countries – the U.S., the U.K., Germany, Poland, France, India, China, Australia, Colombia, Argentina, Mexico, Brazil and Japan – examining how they prioritize, address, and perceive a range of “sleep issues.”

Philips said several studies estimate that more than 100 million people worldwide suffer from sleep apnea, 80 % of whom remain undiagnosed, and that, globally, 30% of people experience difficulty in initiating and maintaining sleep. Sleeping well is essential to good health, and yet only one-third of people who suffer from sleep disorders seek professional help, the company noted.

"Sleep is the cornerstone of a healthy lifestyle. On a day-to-day basis, how well and how long we slept the night before is the single most important variable dictating how we feel," said Dr. David White, chief medical for Philips. "Thus inadequate sleep can have an immediate impact on our wellbeing unlike exercise or diet. This survey shows that despite knowing sleep is important to overall health, people are still struggling to address it in the same way they would exercise or nutrition. The more we understand how sleep impacts everything we do, the better we can adjust our lifestyle and find solutions that help us get better sleep."

The findings from that research should be of interest to truckers:

Though the survey found that the majority of those polled (67%) view sleep’s impact on their overall health and well-being to be “significant,” only 29% felt “guilty” about not getting enough sleep, in comparison to the guilt over not exercising regularly (49%) and eating healthier foods (42%)
About six in 10 global adults (61%) have some kind of medical issue that impacts their sleep, with a quarter of adults reporting insomnia (26%) and one in five experiencing snoring (21%). Worrying has kept over half of global adults up at night in the past 3 months (58%), followed by technology distractions (26%).
After a bad night’s sleep, those polled said they “look tired” (46%), are “moody/irritable” (41%), aren’t as “motivated” (39%), or they have trouble concentrating (39%).
Three-quarters of those polled (77%) have tried to improve their sleep in some way. Collectively, many have turned to soothing music (36%) or instituted a set bedtime/wake-up schedule (32%).
Throughout the global results, one outlier presented itself in adults aged 18 to 24; the so called “Millennial” generation. Despite being less likely to follow a set bedtime compared to other generations (38% vs. 47% of those aged 25 and over), this group reported getting more sleep each night, on average, than other age groups, with those aged 18-24 getting an average of 7.2 hours, compared to 6.9 hours among those aged 25 and over. They are also more likely to feel guilty about not regularly maintaining good sleep habits as compared to those ages 35 and over (35% vs. 26%).
Now while all of that may sound a bit too “touchy-feely” for many truckers, the impact of sleep deprivation is anything but. In fact, chronic sleep-deprivation, which affects 37% of U.S. workers, is getting so bad that the American Academy of Sleep Medicine (AASM), the Centers for Disease Control and Prevention (CDC), the Sleep Research Society (SRS) and the National Safety Council (NSC) have joined forces in a campaign to get companies to help their workers avoid fatigue and develop healthy sleep habits for long-term success and well-being.


“Nearly 70 million Americans suffer from a sleep problem and nearly 60% of them have a chronic disease that can harm their overall health,” said Janet Croft, the senior chronic disease epidemiologist in CDC’s division of population health. “Lack of sleep and sleep disorders, including stops in breathing during sleep (sleep apnea), excessive daytime sleepiness (narcolepsy), restless legs syndrome, and insomnia, are increasingly recognized as linked to chronic disease, including obesity, high blood pressure, and cancer.”


And such chronic fatigue is costly in other ways. According to the NSC, fatigued workers cost employers about $1,200 to $3,100 per employee in declining job performance each year, while sleepy workers are estimated to cost employers $136 billion a year in health-related lost productivity.

Sleepiness also impacts transportation in major ways. For example, the National Transportation Safety Board (NTSB) estimates that fatigue has been a contributing factor in 20% of its investigations over the last two decades – and it’s why the agency included “reduce fatigue-related accidents” on its 2017–2018 Most Wanted List of transportation safety improvements.

On top of all that, the effects of sleepiness are exacerbated and pose a constant struggle for workers who work night shifts or rotating shifts, and for those who work long hours or have an early morning start time.

U.S. Bureau of Labor statistics show about 15% of full-time employees in the U.S. perform shift work, many of whom suffer from chronic sleep loss caused by a disruption in the body’s circadian rhythm.

Chronic sleep deprivation is also associated with an increased risk of depression, obesity, cardiovascular disease and other illnesses that negatively impact a worker’s well-being and long-term health, according to the CDC’s research – and insufficient sleep is a big problem in transportation-related categories, the agency added.

All of that is good fodder for trucking to keep in mind as the industry attempts to handle a surge in freight demand that’s expected to keep on rolling through this year and next.

SOURCE: https://www.fleetowner.com/industry-perspectives/trucks-at-work/article/21702127/getting-good-sleep-it-still-aint-easy-especially-in-trucking
Posted by Jim Barnes at 8:30 AM